“Usually, when the distractions of daily life deplete our energy, the first thing we eliminate is the thing we need to the most: quiet, reflective time. Time to dream, time to contemplate what’s working and what’s not, so that we can make changes for the better. (January 17)” – Sarah Ban Breathnach, Simple Abundance: A Daybook of Comfort and Joy 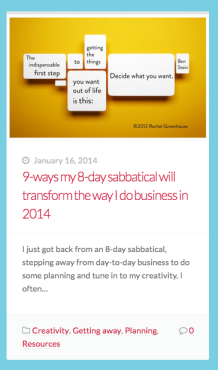 If you’re interested in how I spent my little sabbatical–not business as usual time away–and what I discovered while distraction-free in Charlotte, I’ve written a post about my experience on my Rachel Greenhouse Consulting Services website (www.rachelgreenhouse.com) Click the link or image below to go directly to the post.

I met my adorable friend Anne-Marie through the miracle of Facebook.

My Jesse and her Carmen were in school together, hanging out in a close knit group of four friends they called their “posse.” And so Anne-Marie and I “friended” each other online.

One day she simply wrote something like this on my wall:

“I have heard that you like to garden and I’m looking for some advice. Would you be willing to come and look at my wee garden with me?”

Anne Marie grew up in Glasgow. So the word “wee” is bandied about quite liberally in her conversations. I adore it.

And so I said yes and we made a date so that I could meet her and visit her “wee garden.”

I really don’t “officially” know anything about gardening. But that, as you likely know, has never stopped me from giving advice or encouragement when it has been requested, regardless of the topic.

I went to see Anne-Marie’s “wee garden” and made some suggestions. And she was thrilled. I wonder if her husband Michael was quite as thrilled with what could have been perceived as meddling from some unknown and unqualified person. In any case, he was more than tolerant and I did try to be useful.

Fast forward a couple of years and Anne-Marie is now one of my loveliest friends. Jesse and Carmen still enjoy each other’s company, but Anne-Marie (or AMW as I call her) and I are fast friends. Kindred spirits. I told her recently that when I come to pick her up for some event or cooking class or retreat or something or other, I always feel as though I am stopping in to pick up my school chum. And that we likely will get into some kind of mischief while we are out. Something the tolerant headmistress would smile and shake her head about, looking fondly at us as we returned to our classrooms.

Yes, we are far too old for this, but it is the best way that I can find to describe how Anne-Marie makes me feel.

Over the years I have become Anne-Marie’s informal gardening coach. I even drove to her house with a basket full of ferns and other plants to transplant last year. She has made a lot of changes to her yard, even putting in a vegetable garden. She has been an exemplary pupil (smile.)

At the end of last summer I dropped in for a “wee chat” and Anne-Marie proudly showed her garden off to me, pointing out what had taken off and what hadn’t done as well during the season.  She also mentioned that she and Michael were frustrated by a delphinium that–though very beautiful earlier in the season–had become prickly and was taking up a lot of space. She said that they were working hard to keep it happy but that it had become a real nuisance and was making it difficult to even work in that area of the garden.

As you may know, delphiniums are not prickly plants. So I was perplexed. And Anne-Marie wanted me to take a look. My plant knowledge is not extensive, but I am familiar with most of the major perennials that can be grown in this zone. Within seconds I was able to ascertain that this plant was most certainly not a delphinium. The delphinium was there, but completely crowded out by the tall unidentified nasty prickly thing.

I confidently told Anne-Marie to get it out of there. It was some kind of weed, and a pain-inducing one at that. And it certainly was not a delphinium, which is a very gentle and fragile plant by nature. We then went into the house, where she made me feel like the most successful gardening coach in the universe by proclaiming confidently to Michael and Carmen and both of their cats that “Rachel’s figured it out. It’s not the delphinium. It’s a weed. She says we can take it out.”

I went home and a simple google search confirmed that said delphinium was actually a stinging nettle.

To be fair, the foliage of both plants is somewhat similar:

I sent Anne-Marie this link (http://www.thehealthage.com/treat-rashes-and-irritation-caused-by-stinging-nettle/0426/) and below is her response:

“That was it alright.  I just pulled the damn thing out of the ground yesterday (looking like a knight ready for battle I was so protected 🙂 – so the wee delphinium (that had been much maligned as being the root (ha) of the problem) looks very happy now.

It was great to see you on Saturday and wished you could have joined us for dinner – another time for sure!!

And this is just one of the reasons I love gardens.

In this story–as in many tales before and since–a garden has gifted me a dear friend and an opportunity for self reflection.

Perhaps it’s having grown up in a home where everyday life was constant fodder for sermon illustrations, but this funny experience instantly made a spiritual and philosophical impression on me. The question is:

Are you caring for a stinging nettle as if it was a delphinium?

Is there something or someone that’s hurting you all the time, crowding out the good things in your life and injuring you every time you get near it?

Are you nurturing this thing because either you don’t know–or can’t see–that it’s actually a nasty weed?

Or can’t you part with it because you’re not sure that the beautiful delphinium is there, just on the other side of the stinging plant?

Promote Your Page Too